Ikwerre people are found in the Niger Delta Region of Nigeria. They are within the rain forest belt. The area notices high annual rainfall. Some parts are blessed with mangrove forest and creeks that crisscross Rivers state. There is also abundant raffia forest. This features, coupled with adequate sunshine have made the soil in Ikwerre adequate for the cultivation of palm produce, cassava, yam, vegetables.etc. distillation of palm wine into gin (kai kai, ogogoro, akamere, manya beknu).

The Riverine Ikwerre villagers engage in fishing in addition to the general occupation of farming, and trading. The Ikwerre land played a promo0nent middleman position in trade (including the slave trade) between the hinterland and the coastal people.

The language spoken by the people is Ikwerre a corruption of Iwherr’oha. As a characteristic of languages, Ikwerre is spoken in many dialects among which are Elele, Akpor, Apara, Obgakiri, Odegu, Emohua, Allu etc. all the dialect are mutually intelligible. Professor Kay Williamson (1989) classifies Ikwerre, Ogba, Ekpeye, Ndoni and Etche as the Igboid languages of the lower Niger.

The Ikwerre land is bonded by other Ethnic groups. As the map below shows, to the Northwest are Ogba and Ekpeye, Northcentral, Egbema and Ndoni , to the North East, Ohaji of Imo State, to the East, Etche, to the South East, Ndoki and Eleme, to the South, Okrika, to the South West, Kalabari and to the West, Abua. 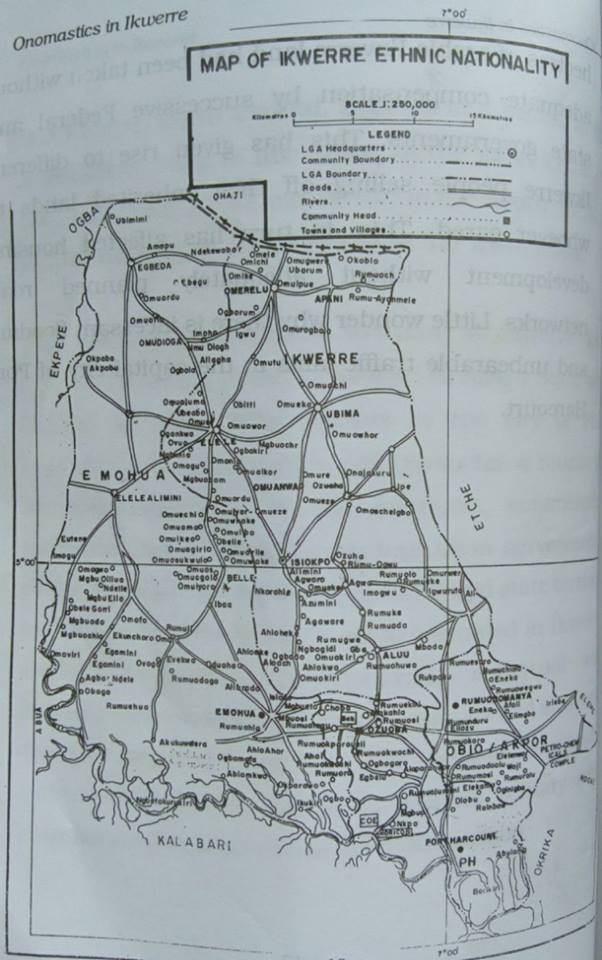 The blessed Geographical location of Ikwerre has endowed it with a strategic position in Rivers State and Nigeria at large. With regards to the city of Port Harcourt, which the people call Igwuocha, a tourist is at once introduced to the economic, Commercial, Industrial, Academic and Communication net centre of the Niger Delta. Of the eight federal and State tertiary institutions in Rivers State, six are situated in Ikwerre land. For the purpose of developing industrial and housing estate, military camps, barracks and shooting ranges, airports, seaports, railway terminals, prisons, and prison farms as well as tertiary and communication institutions, over 300 million hectares of arable Ikwerre land had been taken without adequate compensation by successive federal and state governments. This has given rise to different Ikwerre people selling off their inherited rights to whoever cared. This, in turn, has affected housing development without adequately planned road network. Little wonder why there are incessant flooding and unbearable traffic jams in the capital city of Port Harcourt.

As expected of pre-literate African societies, the history of the people is wrapped in myth and mystery. This presupposes that historians may have to resort to oral tradition for the justifiable/credible reconstruction of the people’s history. From the post-colonial dispensation to the present, professional historians and other personals have attempted to reconstruct the history of the people. For instance, the works of Elechi Amadi, especially the Concubine, the Great Ponds, the Slave (novels) and Isiburu (a verse play) are a literary attempt at reconstructing a semblance of the Ikwerre society in the pre-colonial era.

In the absence of valid historical records, historians accept oral tradition as a primary source of writing African history, the defect associated with this method, notwithstanding. The history of the origin of the people is traceable to the waves of migrations, which stated in the 13th century AD in the Benin kingdom. The migration was influenced and introduced by the despotic or tyrannical rule of Oba Ewuare the great (Ogwaro) (Bon woke et al, 1993;p2).

Some other historians prefer to trace this migration to the old Mali empire and also date it to the 13th C. [Chukwu and Amadi forthcoming]. According to this source, a band of this migrant moved through Onitsha [where their language was said to have been influenced] to Ogbaland and finally to their present abode. The fact that Ogba, Ikwerre, and Ekpeye ethnic nations maintained the same tradition of origin lends credence to this source of oral tradition.

The oral tradition holds that one epoch in the reign of Oba Ewuare witnessed the mysterious death of his two sons. The Benin monarch, therefore, issued a decree making it punishable by death for any man to give birth to a son before the Oba had two new sons to replace his dead ones. Akalaka and Ochichi, the putative founding fathers of Oba. Ikwerre and Ekpeye rejected this draconian decree. Their refusal to accept the decree attracted the attention of Oba Ewuare. Realizing the enormity of rejecting the Oba’s order, the two brothers fled at night. They moved southwards to Agbor, Obigwe and later settled by river Imoku from where Omuku derived her name. (Woke et al 1993; p3)

Akalaka had two sons. Ogba and Ekpeye. As both sons had started procreating, Ekpeye was said to have accidentally killed one of the children of his brother, Ogba when the latter was away on a hunting expedition. This ugly incident coincided with when Ochichi was to move further south. Ekpeye for fear of obvious reprisals joined his uncle. They moved towards to Sombreiro river; Ekpeye settled at Ola-Ehuda (now Ahoda) the traditional headquarters of Ekpeye land. Ochichi crossed the river at Akpabo through Eligbo before finally settling at the present site of Elele, the traditional headquarters of Ikwerre land.

The above stance by Sam Woka in Akwa, 1993 makes room for further historical studies. In this vein, Chuku and Amadi (forthcoming) agreed that Alkakaka and Ochichi were related and made the necessary migration together. however, they argue that it is faulty that Ochichi had four sons from which the clans of Ikwerre were derived. They have pointed that Ochicha had seven sons from which the seven clans of Ikwerre (Iwherioha Asa) were derived. The seven sons were Elele, Isiokpo, Rumuji, Emuoha-Ogbakiri, Allu-Igwuruta, Akpor and Obio. The seven sons begat the seven major and sub-clans of Ikwerre.

Of these clans, the Akpor people lay claims to autochthony – a belief that they came to be in their present settlement through divine providence not through migration i.e. God planted their progenitor in Akpor land. Professor E.J Alagboa et al (1989 p56) says “…. The single recorded claims to autochthony are the Akpor Ikwerre who have been recorded as stating that they have been in their location from the beginning.’’

Pursuing this issue further, the incumbent Nyenweali Akpor, His Royal Highness, Eze B.O.O.Oriebe JP. stated “if we could believe that people migrated from Mali, Benin or anywhere else, we should also believe that God kept some people here and that there is nothing wrong to suggest that people also migrated from here.’’

The issue of autochthony as can be seen in the Yoruba tradition holds that in the beginning, when all was void, Oduduwa descended from heaven with an empty calabash and landed at Ile-Ife. (S.B. Biobaku, 1989, pp 30-31).

Historians may do well to investigate the claim that during the British colonial rule, certain clans of Ikwerre were excised for administrative convenience and purposes.